What Is Geography Concept ?

The term Geography comes from Greek geo which means earth and graphien which means imaging. Geography is science that describes everything that is on the surface of the earth. 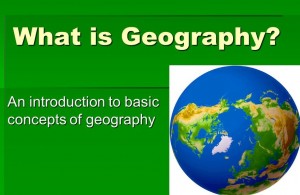 The concept of Geography as spatial science

Geography is an integrative field of science that studies symptoms on the face of the earth (in physical dimensions and human dimensions) using spatial perspective (spatial perpective).

1. Geography as a spatial science studies how and why a natural or artificial phenomenon can differ from one place to another on earth. The discipline is concerned with the use of the earth space. The study of spatial variation, of how-and why-things differ from place to place on the surface of the earth. 1b).

The concept of Geography as idiographic science

Idiographic means reviewing / describing things rigidly / in detail. 2) Geography as an idiographic science whose object includes the geosphere means to examine the atmosphere, hydrosphere, pedosphere, and anthroposphere in detail.

A geographer can explain in detail about Enggano Island, one of the small islands in Indonesia, both its relative and absolute location as well as its weather, land, and population density. One contribution from the application of this concept is mapping.

The concept of Geography as a nomothetic science

Nomotics means finding propositions, theories, laws based on order that occur in nature. Geography as a nomothetic science means finding distinct patterns based on phenomena that occur on the surface of the earth. The hypothesis of a phenomenon is then tested, then a theory and model are built. 3)

The frequency of settlements in villages is less than in the city. The density level has a distinctive pattern, which is more compact towards the city center.

The concept of spatial interaction

The movement (e.g., of people, goods, information) between different places of independence between different geographic location or areas. 4) The conditions for spatial interactions are: i. Complementarity ii. Transfersability iii. There is no third party that mediates between interacting parties (direct interaction).

The occurrence of exports - imports of industrial raw materials between Indonesia and Japan. The interaction was carried out directly by the two countries. The cooperation will be even smoother if the commodity transfer path runs smoothly.

The Concept of Environmental Determinism

Extreme natural conditions (very dry, very cold, very erratic climates, very heavy reliefs) like those on the African continent make the lives of its inhabitants seem to depend on 'natural mercy'.